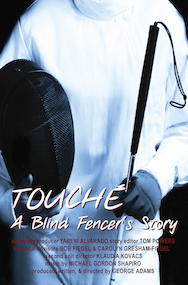 Touché shares the poignant stories of several blind and sight-impaired individuals who endeavor to master blindfolded fencing. As much a story of vision loss as it is a documentary of a fascinating sport, Touché follows the personal lives of the fencers as well as a nail-biting championship competition.

Michael’s score for the film utilizes an intimdate chamber ensemble including cello, piano, and guitar. The music was augmented with drums and hand percussion to capture the cat-and-mouse energy of a dynamic athletic event made even more gripping by its blindfolded variant.